I don’t know why, but I’ve always found it hard to write based off of a picture for inspiration. Weird writing prompts I can go with all day, but show me a picture and tell me to write about it, and for some reason, I always freeze up. I don’t know why that is, but I found it to stay true with this week’s writing challenge from the terrible mind of Chuck Wendig.

That said, I committed to a picture (#42, posted below) , and interestingly enough, as I sat her struggling with writer’s block, I realized exactly what my story would be…

Below, said story and the picture that inspired it. 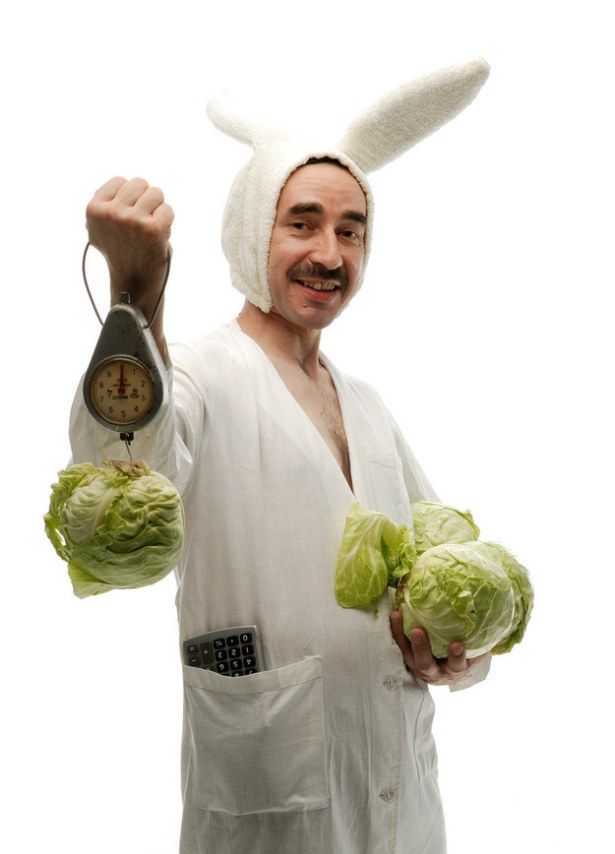 I looked at the man before me and I have to admit, I was puzzled. Maybe it was the cheap, flimsy bathrobe wrapped around his body, almost but not quite translucent enough to reveal the hairy body beneath. Maybe it was the oh so fashionable soup strainer mustache, or the matching bushy eyebrows that made one think of stale cigar smoke and cheap booze. Maybe it was the way he was holding up a grocer’s scale like some strange vegan version of Lady Justice, weighing heads of lettuce like they were the heads of the condemned in revolutionary France. Maybe it was the bunny hood.

It was probably the bunny hood.

“Don’t do what, exactly?” I asked, still not quite sure what he was talking about or where he actually came from.

“Yeah. Don’t you know that starting a story with a dream sequence is a bad idea?”

A dream sequence! That would explain some things, sure! I pinched myself, hard. It stung. The bunny-man gave a tsk-tsk, shaking his head sadly.

“See, there you go, running with the dream tropes. Pinching yourself, really? Let me guess, your next step is gonna involve a splash of water?”

I looked down at the liquid laden bucket that had inexplicably appeared in my hand. I set it down gingerly, somewhat embarassed. The bunny looked pleased.

“I’m not going to tell you,” he replied. “Look, I’m offended enough just being here. That you expect me to then reveal some great detail about your inner turmoil and traipse gleefully through exposition land is, frankly, insulting. You want to know why you’re here? Figure it out your damned self.”

“Please do. I love hearing about my questionable parenthood from a guy talking to a man in a rabbit suit.”

“You’re him. The wicked beast that haunts me any time I try and write a story based off a picture based prompt. You’re Writer’s Block!”

The rabbit-man laughed, and gave a half bow.

“Guilty as charged,” he admitted, “but I’m really not so bad as that.”

“Of course you do. You’re a writer. You’re bound to hate me.”

He took a break to set down the scale and the lettuce, plucking a single leaf and then munching on it loudly.

“But,” he said between chomps, “What you don’t realize is that I’m the greatest pal you’ve got.”

“You’re really going to make me do it, aren’t you? Fine. Fine! I’ll do it. I’ll play Mr. Exposition, but only this once, you dig?”

“Alright. It’s like this. I’m not the asshole people make me out to be. Sure, I can be crippling. I can come in in the middle of a really great story and really throw you for a curve. I bring things to a crashing stop, and it could be hours, days, weeks, hell, years before you get back to writing. So I guess, yeah, I can understand your frustration.

Thing is, though, I’m doing you a favor. You wanna know why I come in and louse up your flow? Because what you were writing wasn’t working. Simple as that. It’s kind of like a train wreck crossing over a busy intersection. You weren’t paying attention, things started to go off track and boom, there I am. Stopping the flow of words, keeping you from launching yourself into the fiery, burning doom of crap story telling.

But do I get any credit for that? No! I get yelled at, cursed, threatened, begged, cajoled, even propositioned if I’d just go away. Or worse, I get blamed when you really wanted to play some stupid Facebook game anyway. You don’t care that I take the bullets, man. You don’t care that I shoulder that blame, even when it’s unfairly laid on me. You just bitch, bitch, bitch, moan, moan, moan.”

“Gee,” I said, shrugging a little self-consciously, “I don’t know what to say.”

“Ah, no, wait. That one is my fault, sorry. No one ever knows what to say when I’m around. Kinda intentional, that. Look, let’s just let bygones be bygones, alright? Since we’re clearly committed to this dream crap, lets skip forward to the part with the booze and the women. Buy me a carrot juice, introduce me to some of those dream babes, and we’ll call things even. Sound good? Shall we do this?”

“Yes,” I said, extending a hand in friendship to my old nemesis, “Let us.”